In this model, developers are working on their own local copy of the database and later commit changes to a centralized repository. 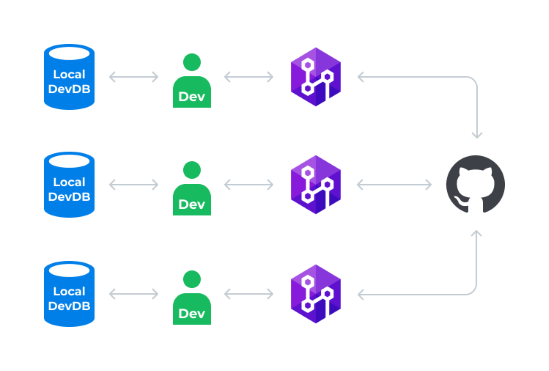 A local copy of a database is not created automatically when dbForge Source Control is linked to a database. You need to do it manually. It doesn’t matter where you create the local copy of the database: at your local computer or a remote one.

Firstly, all developers install dbForge Source Control on their machines so that they can all commit their changes.

Then, any of them needs to link the database to version control and make the initial commit.

It is required to specify the Dedicated Model mode when you link a database to a repository.

Next, the rest of the developers can then get the latest version of the committed database:

Once all the developers have linked their copies of the database to the repository, the workflow is as follows:

It’s best practice to Get Latest before you start working on changes. This makes it less likely that your changes will conflict with anyone else’s.

The repository contains all changes made. To learn how to view changes history for the entire database or separate database objects, refer to the Viewing Source Control history topic.

Sometimes, the changes made by several developers to the same object may be conflicting with each other. To learn how to resolve conflicts, refer to the Resolving conflicts topic.

Databases must be maintained on the machines of all developers.