What You Need to Get Started

In the first place, we need such tools as:

dbForge products that are directly involved in the CI process and are indispensable to set up a baseline process:

Products that can be employed in the CI process as they greatly widen capabilities when organizing the process.

When setting up a CI process, the following files are also required:

If it is necessary to fill the database with realistic data, then the following file is needed:

It is important to keep these files in the source control and have an option to save them to disk every time you run Database CI.

The following figure shows the database CI workflow with the use of dbForge tools.

As you can deduce from the figure, the CI Database process starts after the changes made by developers.

The CI process can be initiated in different ways:

You can choose how often you would like to run CI depending on your CI process.

The figure also shows that there are mandatory stages in the CI process, such as Build Database, Run Unit Tests, and Publish Package. And there are also optional stages, such as Populate With Data and Format Script.

What Happens When Database CI Starts

Every time the CI process starts, we pull the latest file changes into the test machine from the source control repository:

Note
All these files can be stored in one repository or in different ones. It depends on you. The folder which you merge all these files into may have the following view: 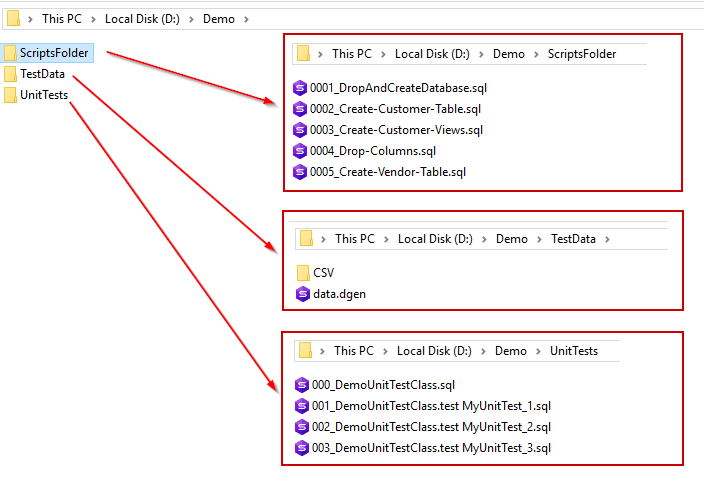 After the database source code has been received, the PowerShell *.ps file opens (for example, with Jenkins) with the necessary cmdlets. These cmdlets create an SQL server database from scripts. If necessary, the database is filled with test data. Next, unit tests are created for the database and then they are run.

We assume that before creating Database CI there is already a GIT repository with a database project where developers change the database schema (add new database objects or change the existing ones).

There are several methods for organizing database scripts:

Let’s take a closer look at them and the difference between them.

This method remains to be the most demanded and popular today.

All these changes are organized as SQL files; the names of these files are sorted in chronological order.

The figure below shows an example of a folder with migration scripts. 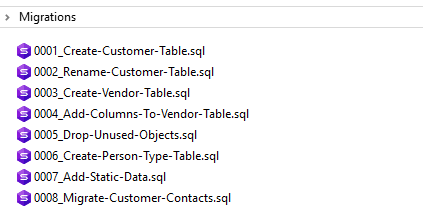 These scripts are run on the database sequentially with the help of the Script Executor functionality of the Schema Compare tool.

This method allows creating (updating) the database using scripts ‘from scratch’, i.e. the database is presented in scripts ‘as it should be’, and almost all scripts are stored as CREATE instructions:

In this case, these scripts are synchronized with the target database with the help of Schema Compare.

This method is a mix of the two above-mentioned methods. But it is rarely used because it requires high accuracy since a part of the scripts (a more manageable process) comes from migration scripts; and then the database is updated using Schema compare or vice versa.

Unit tests are required for database testing. Unit tests comprise a set of *.sql files, inside which special methods (e.g., AssertEquals, AssertNotEquals, etc.) of the tSQLt framework are called. tSQLt is an open source Database Unit Testing framework for SQL Server. You can find a detailed description of this framework at tsqlt.org.

How to Install tSQLt

Before starting to manipulate (add, modify, or delete) unit tests for the database, it is necessary to install the unit test framework on the database. To do this, right-click the database and select Install Test Framework …: 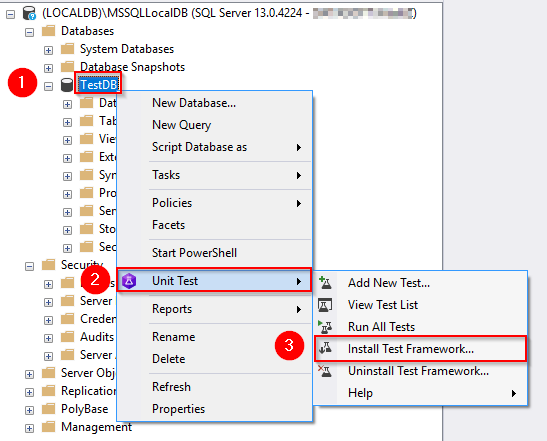 After that, the tSQLt framework will be installed on the database. In fact, this framework is a tSQLt database schema. 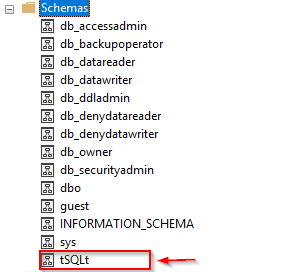 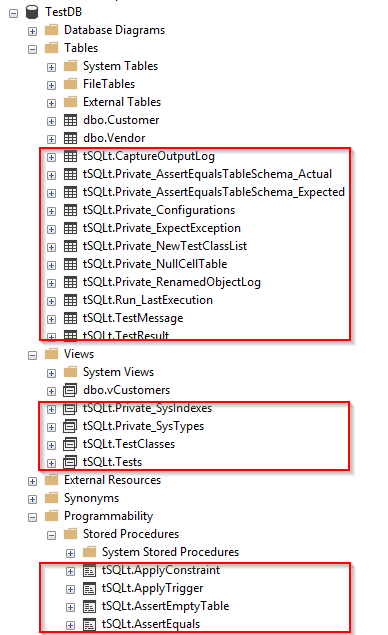 A complete list of these objects can be obtained by running the script: 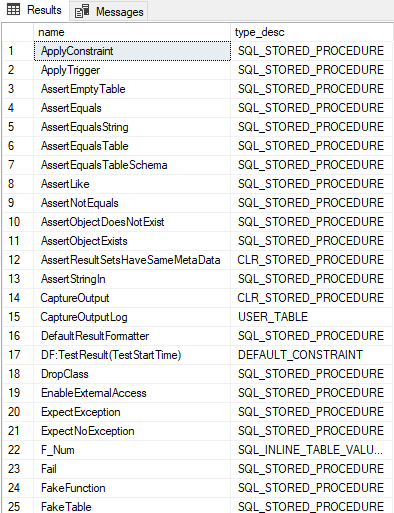 Now all the preconditions are met, and you can create unit tests. 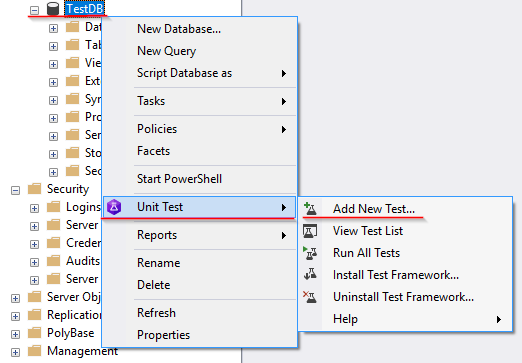 Let’s raise the bar and create tests manually using SQL scripts in order to see how tSQLt tests are arranged.

First, you need to create a test class that will include all test cases. Every developer can create any number of such classes.

The script below creates a new test class named DemoUnitTestClass.

When you create a new test class, in the back of the scene tSQLt creates a schema and adds an extended property with value so that the tSQLt framework can easily figure out that this schema is created for the test class. The following query verifies this statement.

To check the value of the schema in the Extended Properties click Security, then click Schemas, and right-click DemoUnitTestClass.

Then select properties in the menu that appears. 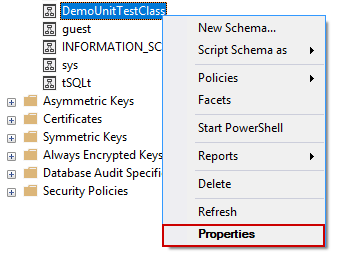 Finally, if you want to delete the created test class, you can execute the following stored procedure, which accepts the test class name as a parameter.

If you run the DropClass procedure, you’ll delete not only the test class (schema) but also all the objects that are associated with this class.

You can also delete a new test in the following way: 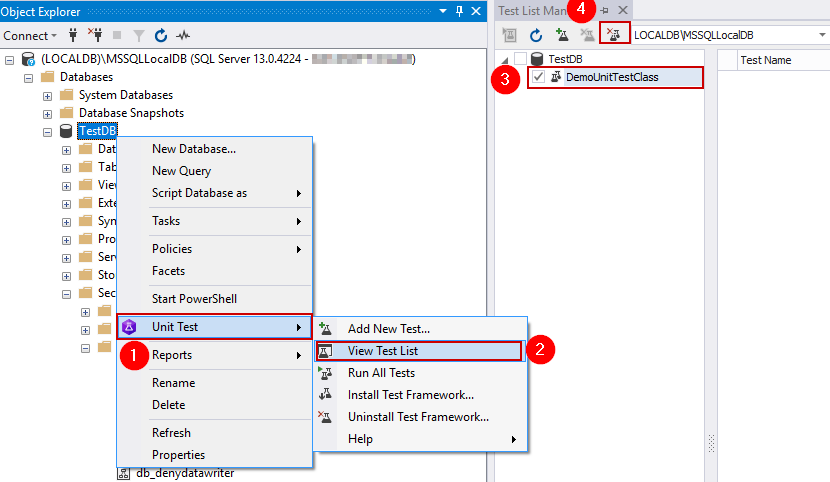 After creating the DemoUnitTestClass class, you can create test cases for it.

To create a new test case, right-click the required database in the Object Explorer, click Unit Test, and then select Add New Test. 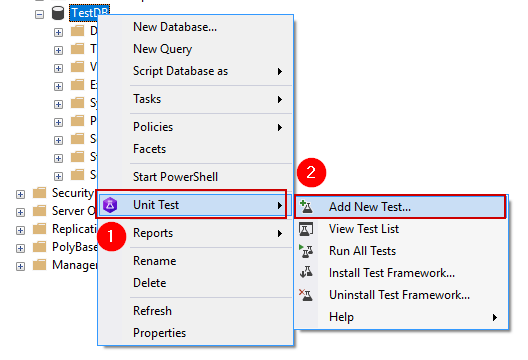 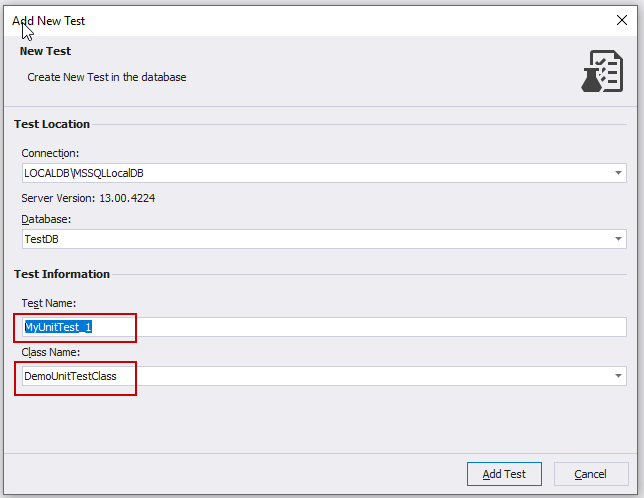 By default, the Test Name is MyUnitTest_1. Click Add Test.

After the wizard is closed, a new skeleton document is automatically created with the body of the stored procedure, where it is requested to write your own verification script. 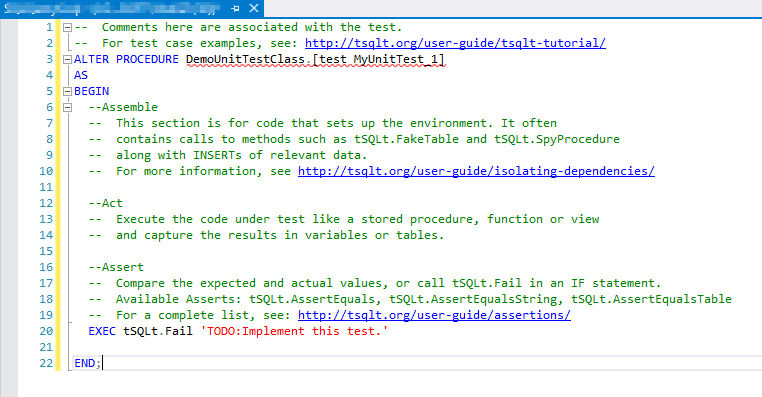 If you follow the suggested link Unit Test Assert Methods to tsqlt.org, you can see a whole list of methods that can be used:

Let’s consider the tSQLt.AsserEquals method. This method allows you to compare the expected and actual values and accepts three parameters:

Now let’s change the code of our test case in the following way:

Then, press F5 for the changes to take effect.

To run test cases, you can use the tSQLt.Run method. This method accepts the test class name parameter. The launch of this method runs all unit tests that are tied to this class.

The output will be as follows:

You can also run the tests using the Test List Manager.

This example displays the order of actions required to create test classes and test cases for them. As a result, you can use both the script and Task List Manager to create and modify tests.

Save Unit Tests to Drive

After the tests are created, you need to save them and then place them in the central Source Control repository. It is important to save tests to disk because every time when a database is created during the Database CI process these tests will also be created on the database for their subsequent launch and unit tests verification.

You need to save the tests to files in alphabetical order. The order is as follows: the classes at the beginning, then - test cases of these classes.

For example, if there is a class DemoUnitTestClass and three test cases for it, then the folder with the scripts will look like this:

000_DemoUnitTestClass.sql contains a script for creating a test class. 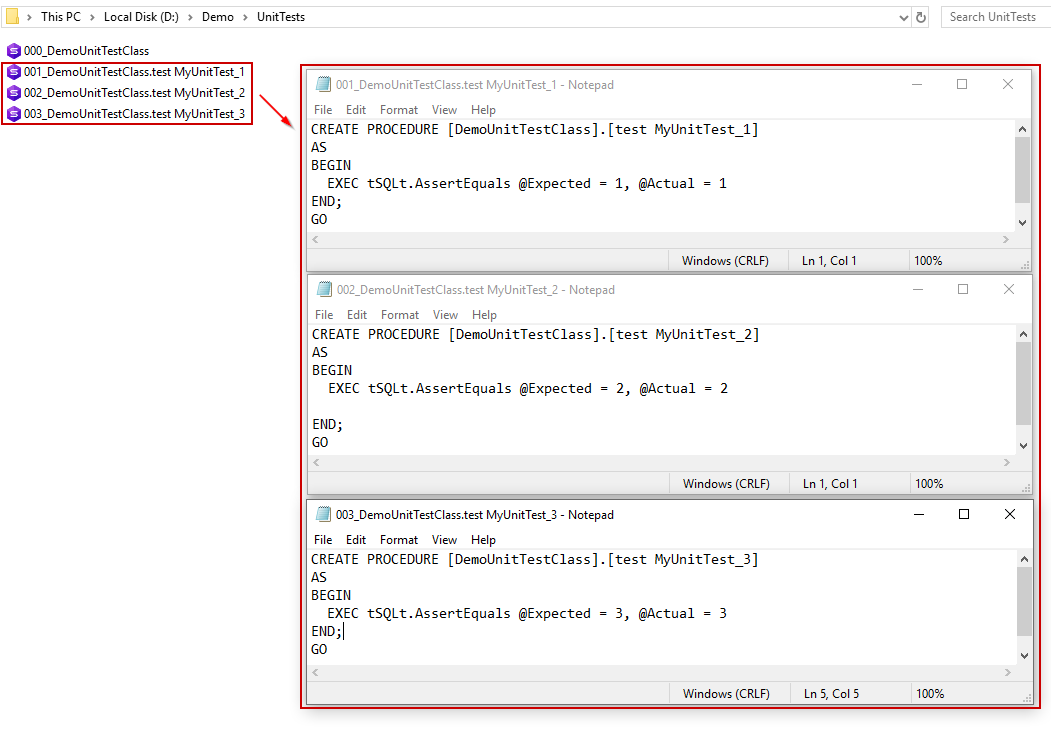 You can populate the database in several ways.

The first method involves using Data Generator, which can fill all or selected database tables with almost an unlimited amount of realistic data.

The second way is to use Data Pump, which allows filling in a specific table from the data file (*.csv, *.xml, etc.).

Since Data Generator is a more preferred method, we will consider an example with its use.

Select the database which you want to create a .dgen project for and click New Data Generation. 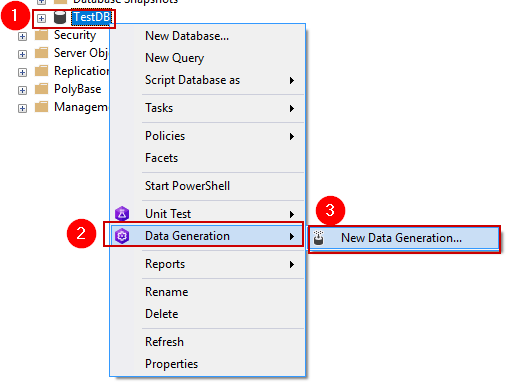 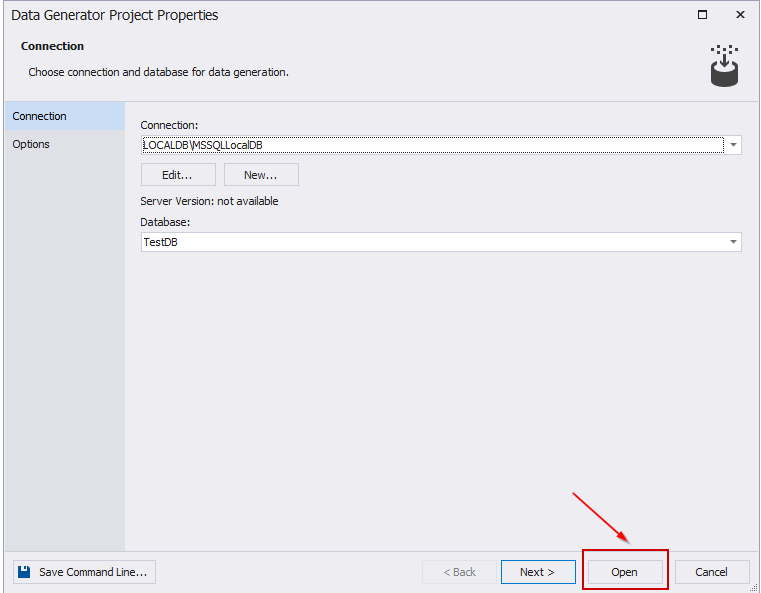 The project window appears, where you can make all the necessary settings.

Next, save the project to the desired folder. 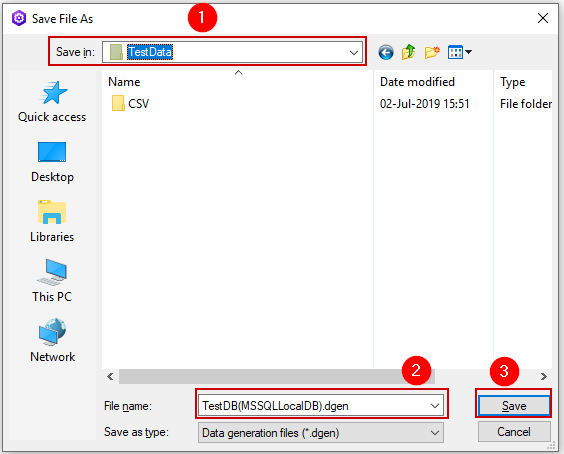 Now the project for database population is ready, you can add it to the central repository of Source Control.

It is time to write a final PowerShell script, which actually organizes the CI Database pipeline.

To do this, create a new PowerShell file, for example, DemoPipeline.ps1 and write a script in it. This script will invoke cmdlets.

After executing this script the result will be as follows: 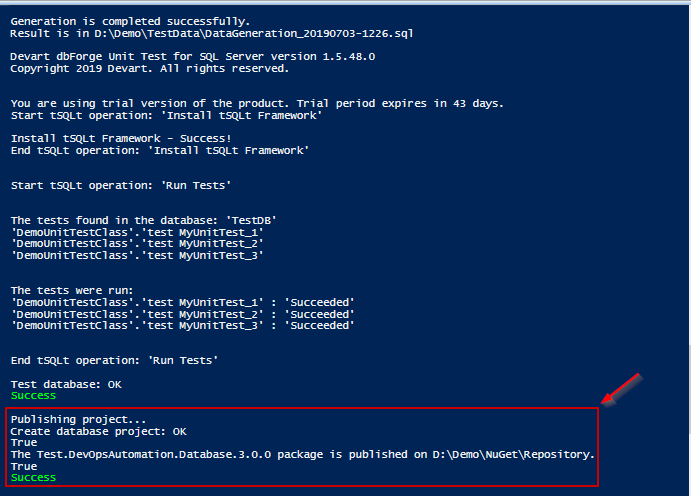 As you can see from the result, we have received a NuGet package with a database project, which can be used later on for the Delivery Integration process.